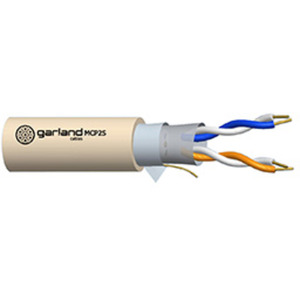 This item is obsolete and no longer available for purchase.

Package options may not always be available

SCREENED DATA CABLE 2 PAIR RS422 7/0.20MM O/A SCN 500M The MCP range of RS-422 computer cables is polypropylene insulated and PVC sheathed. Overall screened versions carry and "S" suffix and individual and overall screened versions carry an "ISCS" suffix. This range of cables is designed for low bit rate data transmission up to 10 MB in an indoor or in-building environment. RS-422 was commonly used for extended data transmission up until the late 1990's. It was used to upgrade RS-232 systems and performed the same role, namely to interconnect DTE equipment such as printers, faxes, scanners and modems. Also referred to as EIA-422and ITU-T recommendation X.27, this type of connection was widely used in Apple computers until superced by the USB interface in the 1998 iMac. The common connector used with this interface was the Sony 9 pin DE-9 connector. In recent times, RS-422 cables have migrated into the security market where they are used for door strikes, motion sensors, IR sensors, keypads and alarm module interconnection.

Not the product you were looking for? Check out other items in the Data and communication cable (copper) 